The Sandown Castle Community Garden is a real Deal treasure. Started by Linda Ford, this beautiful place has been created amongst what remains of one of the three Tudor castles in Deal built by Henry VIII. 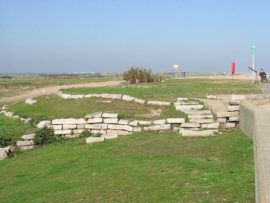 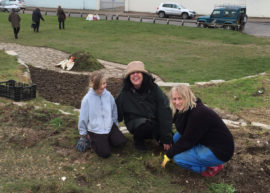 Linda and her team of volunteers have created a stunning display in this previously neglected spot.

Work to clear the ground began in 2015 after permission was granted by English Heritage who own the land. The group began by planting hundreds of donated bulbs, cyclamen and thrift. Dozens of herbaceous perennials have since been added and there is something of interest to see all year round.

The garden has won the town many awards in the national Gardens Scheme Britain in Bloom competitions and will be featured on Gardeners World later this year.

Visit their Facebook page for more information and give them some support.

Brief History of the Sandown Castle

Built by Henry VIII as part of his coastal defence, it took 18 months to build at a cost of £2887.  Similar to Walmer castle in design and built with recycled stone from a nearby monastery, it was completed in 1540.

It was to be guarded by a captain and 34 men, however the garrison may have been varied at times as another source says 18 men.

In 1553, it was given to Lord Clinton, the Lord Warden of Cinque Ports and it passed through a number of hands.

In 1642, Sandown Castle was held by Parliamentary forces, however during the Kent Rebellion in 1648, it was taken and declared for the King. Cromwell’s army besieged the castle and it finally fell.

In 1664, under Charles II, it was used as prison for Colonel John Hutchinson who died there.

It suffered sea damage in 1785 and it was remodelled in 1805 and garrisoned to assist in the defences against Napoleon.

Following further sea and fire damage, the castle was finally sold and demolished in 1863, with the stone being used to repair the castle at Walmer.

Sandown Castle is located a mile south of Deal Castle.

We may earn a small commission through some affiliate links such as Amazon, on this site at no extra cost to you. All proceeds are paid to Martha Trust.

A coroner in Maidstone rules Mati Urb's death on a family holiday to the Kent coast was an accident. [...]

The High Court says some of the advice given to ministers must be disclosed as part of a major case. [...]

A Met Office warning of storms and flash flooding for the South East continues for the next few hours. [...]

South East Water apologises to customers affected by water damage in the village of Hildenborough. [...]

The recent thunderstorms are not enough to negate months of dry weather, Southern Water says. [...]