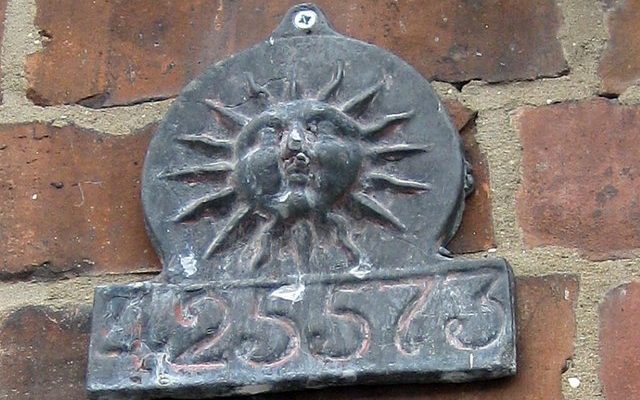 One of the nice things about running this website is having the opportunity to meet many of the interesting people who have made Deal their home.

One such is Tracey Maguire who runs her business Believe to be Beautiful from her Deal base. Tracey calls herself an inveterate fossicker. No I didn’t know what it meant either but apparently it’s an Australian word used to describe opal panning, and has also become popular in the UK to describe fossil hunting in the West Country.

A fanatical record collector Tracey has always enjoyed rooting through second-hand shops and jumble sales looking for gems for her music collection which encompasses all genres and periods and currently amounts to around 15,000 items! It was the discovery of a beautifully crafted studio pottery piece that widened her search to include vintage glass, china and other collectables. She now sells her finds through an Etsy shop and on eBay.

When not occupied in fossicking, she often writes about the items she finds. For anyone who has ever wandered round the conservation area and wondered about the various plaques and marks on some of the houses…read on…

“I was thrilled earlier this year when I came across this superb antique Match Striker advertising the Sun Life Chief Office in Threadneedle Street, London, which was opened in 1810 by the Directors of the Sun Fire Office as a new branch of their century-old business. The two insurance companies, although run as separate entities, were nonetheless linked by the smiling sun face logo, which was already widely used across London on metal fire plaques affixed to houses the company insured.

In the aftermath of the Great Fire of London authorities were keen to reduce the risk of fires spreading to such devastating effect again and by the early 19th Century a number of fire insurance companies employed men to attend to deal with incidents, initially in the City of London and later in the Provinces.

In order to identify policy holders at a time when street names and numbers were haphazard, metal Fire Marks sporting the relevant company logo, and in some cases the policy number, were affixed to the front of properties. Made from iron, brass or lead, these metal plaques were designed to survive a blaze so that they might be salvaged and presented to the insurance company with a claim.

It is probably myth that company brigades would refuse to extinguish fires in properties insured by rival firms as there is evidence of charges being made between companies, but the lack of coordination of the service eventually led three prominent firms, Sun, Phoenix, and Royal Exchange to merge their groups to form the London Night Patrol, and by 1833 all of the brigades were joined together to create the London Fire Engine Establishment.

By 1825, with greater regulation of streets and house numbering, the need for plaques to denote an insured property had largely declined and their primary use was for company advertising, however many still exist in the older parts of most towns and villages in England.

On a walk through the Conservation Area of Deal today I found the Britannia symbol for the County Fire Office, the Sun Office’s smiling face, a joined hand symbol of the Hand-in-Hand Fire Office, as well as those for the Norwich Union and the London and Lancashire Fire Insurance Company. 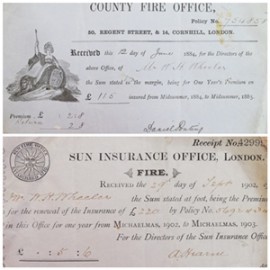 It is always pleasing to chance across an interesting object I know I will enjoy researching but which at the same time I know will be an easy sale and before I could find time to write about it, my Sun Life Match Striker sold to a buyer in America.

It was serendipitous however that, when I finally did get round to writing this piece, I came across a lot of Paper Ephemera which contained three original receipts for fire insurance premium payments. Two of these, dating from 1881 and 1884 respectively, concerned charges of 2 shillings (s.) and 8 pence (d.) for £115 worth of annual cover from the County Fire Office for the property owned by a Mr Wheeler. The third, for the 1902 premium, shows that he paid the Sun Insurance Office 5s. 6d for £220 worth of cover which equates in today’s money to around £24,000. Perhaps premiums had risen that year or maybe he had upgraded to a grander home, or maybe he just saw the writing on the wall for the County Fire Office which would be assumed into Sun in 1906.

My business gives me a great opportunity to search for and find out about unusual collectables. This antique Match Striker prompted a journey through the history of the object itself, the company that issued it and the story behind Fire Insurance Marks and gave me a great subject for a blog at the same time. But best of all it gave me a reason for a slow meander through the pretty streets of my home town on a sunny May morning. And they call this work!”

Reproduced with permission from Believe to be Beautiful.

Looking after our Heritage 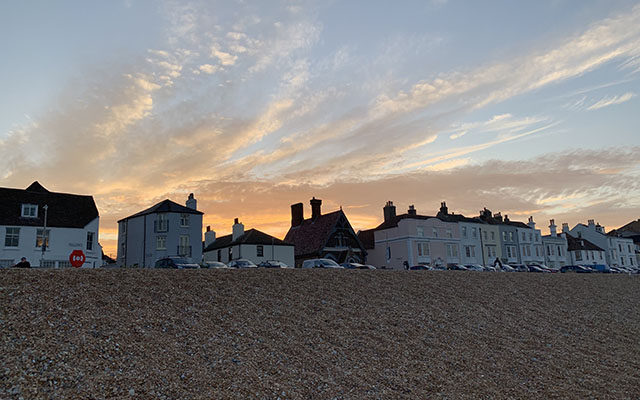 If you have chosen to live in Deal, you will appreciate the charm of this largely 17th and 18th century... Children arriving in the UK could soon be sent to Rwanda as the country prepares to house the youngsters under the government's controversial scheme. [...]

Why plans for thousands of new Kent homes have stalled An issue holding up major housing projects could lead to "uncontrolled development" in some areas - so what's being done to solve the problem? [...] 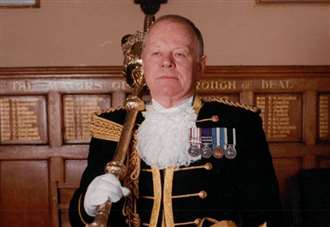 A special memorial service is being held for a Royal Marine who competed in the Winter Olympics. [...] 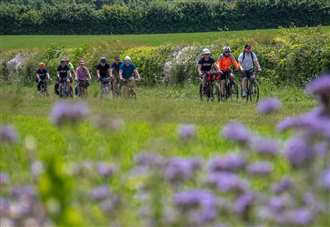 To celebrate the launch of a new 145-mile trail around the county we told our reporter to get on his bike and give it a try. [...]