Deal’s motto, ‘Befriend the stranger’ was definitely in evidence today when Deal welcomed Brandon Lewis MP to town to present the Telegraph High Street of the Year certificate to the Mayor of Deal, Marlene Burnham.

Also present were Dover and Deal MP, Charlie Elphicke, Peter Jull, Chairman of the Chamber of Trade, Kylie o’Brien, weekend editor of the Daily Telegraph, town team members Ralph Cade and Esme Chilton and Robin Green of the Deal Society. Yours truly may have just snuck in too!

Charlie travelled from London to Deal by car with Mr Lewis and took the opportunity en route to talk to him about the inequality of business rates and Deal’s ‘affordable’ parking charges. Highstreetdeal.co.uk may have had a wee bit of a hand in that… 😉

After the presentation and before a tour of the north end of the High Street, full marks must go to Love Drinks who wasted no time in asking for a photo! 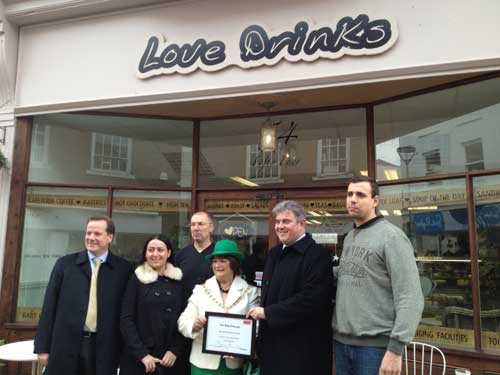 Brandon then spoke to our very own Emily Stott of the East Kent Mercury. Here he is showing her his safe pair of hands…check out that banner… 😉

Next up was the tour of the north end where Esme Chilton of the town team was his host. 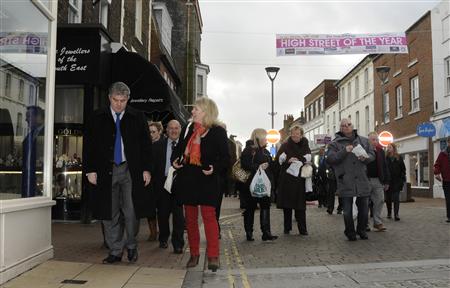 The visit ended with a quick trip to the beach and all too soon the minister was away. All in all a very successful visit!

Honourable mentions must go to Peter Jull, Chair of the Chamber of Trade for his assistance in raising the banner and to Martin Catt of Catts Aerials for coming to our rescue when high winds snapped one of the restraining ropes overnight leaving it bunched up and looking somewhat forlorn. Ropers proved to be masters of spin – suggesting it was deliberate and it was bunched ready for a ceremonial ‘unveiling’. I wish!

Thanks must also go to the Telegraph for running their campaign in the first place, which has resulted in this award being made. I’m not sure they were fully aware of the positive impact it is having. They are now!

Some traders have reported increased footfall this week, due solely to publicity surrounding the award and many say telephone customers are reporting that they had seen, or read the coverage on the news, or in the press. Wetherspoons say there has been no expected January dip in trade, in fact they have exceeded their projections for the last two periods by an encouraging 15-20%. And our snoops have spotted obvious interest in the empty shops so there is much to be hopeful about.

Despite our best endeavours, there may be occasions where the information is out of date.

If you find this to be the case then don’t be shy about letting us know as it will help others! There are around a hundred hits a day looking up business details!

We may earn some money with affiliate links. All proceeds are paid to Martha Trust.